I think the working hours will stay the same or they will get longer.

There are going to be more and more jobs where you sit behind a computer and work with some numbers. Handskills are not going to be as much appreciated as they should be. And also the working hours are going to be crazy.

For the future it is definitely important to know and speak languages. English, of course, and then German and French. But since China is getting stronger it could be possible that Chinese will grow into a worldwide spoken language. Besides that, it’s also important to use your brain a lot. Everyone wants some new interesting ideas. Of course, we always want new stuff when some other gets old. So these are the two most important things for the future.

I have already started thinking about what is going to be popular in the future. And I have learnt that it’s not that important to be a good student and go to a good college to get a good job because  everybody already does that, and in most cases it doesn’t work out. So the one key to me, if I want to be successful is to stand out, and not to do what everybody else is already doing.

I think the biggest problem with the internet is not knowing, how to get off of it. And these things lead to the people always staying inside and never coming outside and not making new friend. My experience was that in the summer in the evening we always went outside and played basketball. One of my friends though, kept playing this stupid game and we all told him to stop, but he didn’t. It was some sort of addiction. 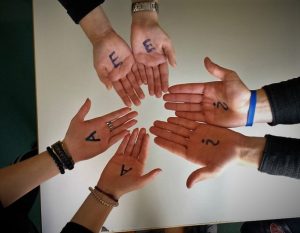