I think, so I exist

In 9th class we have read the book, Wonder: Ana Černetič, Eva Marinič, Erazem Jazbinšek.  And here are some of our thoughts.

Can you accept people that are different from you?

My accepting of different people and people with disabilities is kind of on the low side. I am not good at it. I know that most of them say they are all normal, but my experience isn’t the same. The hardest thing is to start talking because, first of all I don’t have the courage and second of all I don’t know what to talk about. I am also concerned what unusual reactions they might have.

I am an open person. I accept people as they are, even if they are different in some shape or form. If the person is nice and it’s great hanging out with him/her, than I think that looks don’t really matter. I think what really matters are the heart and personality. And that’s what this book showed me.

Can you accept yourself different from others?

I think that I am different. At least from the typical girls my age. Like I just have a different mindset. Most of the time I like that, but sometimes it’s bad when all the girls talk about makeup things and I don’t know what they are saying, so I am bored.

I am different by my thinking. I always look at something from every side that I can find, and then I think of which is the best and that is how most of my thinking works. I often find myself thinking the same way that one would say. I am also very realistic which bothers my mom very much and then we have fights, because she wants me to be polite and I get that. But I am rather realistic than polite. I get that from playing different sports and always being criticised.

I used to be rather realistic than polite. Then I noticed or realized that I was hurting people badly. And I wanted to change it. To be polite, it means to me that you treat people gently as much as you can, because their hearts are tender and sensitive. And I don’t always manage. I think that sport world is often cruel, with no mercy. Maybe you have to be rude to succeed.

All of us or almost all people have a bad day when they are not the happiest with themselves. I am now learning how to be more confident and to love myself even more, because I think that this was my problem. I can accept myself and love myself the way I am, because this is really important. I was never really angry with myself, but I was sometimes a little bit disappointed with myself, because I knew that I could do better.

What is the wonder of the book?

The wonder of the book in August and his bravery. He was a really nice person, mature for his age and brave. He accepted himself and people around him accepted him, too.

The wonder of the book is accepting others, not depending on what they look like.

The wonder of the book isn’t Auggie’s appearance but the fact that in the end everyone accepts him and even likes him, which is not hard since he is a funny guy. It’s hard at the beginning but through time they all get used to him and that is the wonder of the book.

The wonder is August. One has to trust oneself so much to manage to have friends with such a face. This was the power of his spirit. His sensitivity, kindness, good humour. His wisdom and intelligence. The wonder is also the love of his parents and his sister Via for him. 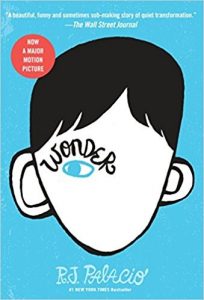